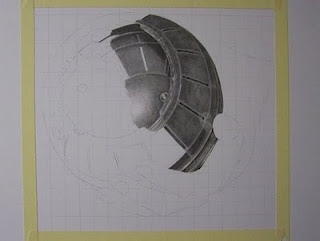 Here is where I am at right now. I felt enough at ease with recognizing the intensity of my darks and lights to dive into the center of the ball. I sometimes think that drawing a globe with all the continents would have been easier! When the reference picture was taken, the flash bounced off the inside of the ball. (The ball itself is translucent blue.) This caused some phenomenal shades of neon blue to appear on the outer shell of the ball and illuminated a world of interconnecting plastic sections and micro details. (This would be awesome drawn in color someday!) I faltered a bit over what was truly darks and mid-tones. Right now, I am concentrating on just getting the basic form and shading in. I know there will be some rework later with details to add and shading to even out. I went ahead with the hand reflection for the thumb and am pretty happy with how it looks. Hopefully, I will be able to knock out most of the ball tomorrow. It does make me think (like this isn't driving me crazy enough!) how cool it would've been with a clear ball. Of course, it would have taken me most of this year to get all those details in!!
Posted by Brenda at 6:54 PM