The weather has been gorgeous in Northern Illinois, and the month of May has been a busy one!  Flea markets and town garage sales galore making for some fun weekends of running.  Schools are closing for another year, and my son is now a college graduate.  Where has the time gone?  *sigh*

I started mapping the little otter's fur a few hours ago and kept going until my hand started to cramp.  This small format can be harsh on the fingers!   ﻿ My schedule will pull me from the board this afternoon.  I hope to get some more time in tonight. :) 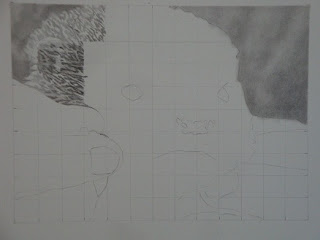 Posted by Brenda at 7:22 AM No comments:

Graphite drawing of a Baby Otter Cont. & A Special Thought on Maurice Sendak and Those Berenstain Bears

Where have I been?? ;)  The last three weeks have been a change of pace to say the least.  Two weeks were spent working full time as I got my training in for a new job.  Last week, my hours were reduced to part time and will stay that way unless one of the other employees decides to take time off.  So, I am happy to say that I have made my way to the drawing board again.  Whew!  It  feels good to be back!! :)

Below is a photo of the progress from last night.  I used my light box to transfer my sketch onto smooth Bristol board.  Since this little guy has a lot of fuzzy hairs protruding from his thick fur, I decided to get the background in place.  As with most of my drawings, the shading may go a little deeper, but it will work perfectly for pulling out the fuzz and tiny hairs with a white eraser.  The edges of the background had been lined with special pH drafting tape prior to being blended but was removed upon completion.  My next logical move would be map in and blend the little guy, since he is centrally located.  The hands will be so much easier to smear than fur, so they will be sketched in last.  :) 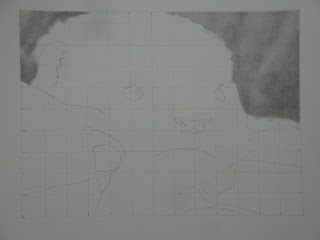 I wanted to take a few moments to give a small tribute to a fabulous artist, Maurice Sendak.  As those of you that have followed me know, my love of children's books is enormous.  About a month ago, my Mom purchased an oversized book at a thrift shop entitled "The Art of Maurice Sendak" that she read and passed along to me.   It chronicled the work of this famous children's book illustrator and author from his beginnings through the late 70's.  I was completely thrilled with the content about his family, the influence of his childhood and other illustrators on his work, and of course the abundance of drawings lent to showcase the evolution of his style.  The book itself was written by Selma Lanes and published in 1980.  Amazing to think that there would be 32 more years after this book of new Sendak drawings!

I began reading this book at the end of April and set it aside to focus on training for my new day job position.  In one of my few moments on the computer, I learned that on  May 8, 2012 this wonderfully talented man passed away.  There would be no more of his magnificent pen and ink work with the intricacy and details that made my imagination take flight.  It was a sad day, but also a day to celebrate a man that made such an enormous contribution, both as writer and illustrator, to the genre of children's literature.

Many may recognize his name as being synonymous with his book "Where the Wild Things Are" -- which is just one of several splendid books that showcased how in tune he was with his feelings from childhood.   I first fell in love with the carefree style of his illustrations in the Miss Piggle Wiggle series!  My admiration has only deepened for him as I now continue to read on about his art and career.  It's fascinating to read his thoughts about childhood and the influence that other illustrators had on his ever evolving style.  So much so, that he also was a collector of children's books and other illustrator's original art.   Definitely a man that I would admire! ;) 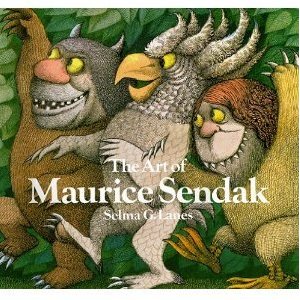 ﻿
And as a additional acknowledgement, February of 2012 brought the passing of another great ﻿woman in the field of children's literature, Jan Berenstain.  She continued on the Berenstain Bear legacy after the passing of her husband Stan in 2005.  Their autobiographical book "Down a Sunny Dirt Road" is one of the best reads in town, and I highly recommend it.  :)  I have collected their Bears in books, on DVDs, and on fabric!  They were an admirable team, and I am absolutely thrilled that their boys are carrying on with more tales from Bear Country.

Where would we be without all of these wonderfully talented people??  *Sigh*  :)
Posted by Brenda at 1:58 PM No comments: