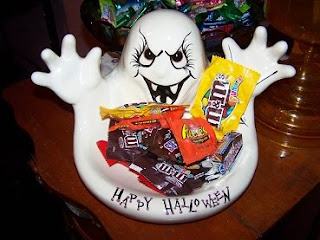 May you all have a Safe and
Happy Halloween! 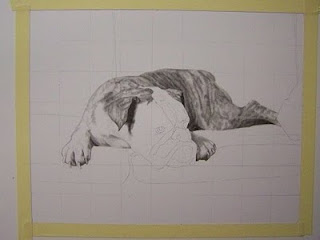 A little blending goes a long way! The bulldog's body is finished. I am very happy with the results. I went over the dark lines with a blending stump to work the graphite into the Bristol board. Then swiped across different regions of the body with various dirty stumps which caused most of the shading to happen naturally. If the shading was too dark, my kneaded eraser pulled it out. When working light areas, the sand paper pad was used to clean my stump so that the shading was very subtle. The best part was deepening the dark shadows. They make the body bounce from the page. I was a little nervous at first that this drawing would fall flat, due to its lack of strong details, but it seems to be going in the right direction.

Now, I will move onto the face. The details are not the greatest in that area, but the contrasts in value are very high. This should help to make it come forward and give the illusion of clear features. My hopes are beginning to rise with this drawing. I know it will look like an old photo when I am done (as it should), and my instincts are telling me that will be the charm of this particular drawing... at least I hope so! ;0)

Posted by Brenda at 6:32 PM No comments: 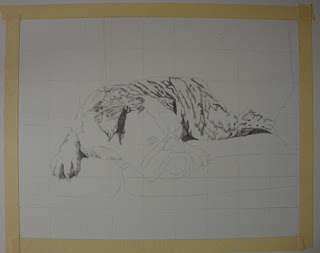 I thought that I should do a quick update to let you know this big guy is not being ignored. (Okay, maybe he was set aside for a little bit.) As you can see by my side bar, I have been creating a new blog for my recycled art, gourd sculpting, textile work, and any other artsy endeavor that may cross my path. It will also include more about my life and my other passions cooking and searching out vintage collectibles. I've added a little more info in my side bar on this blog as well, with just a few minor changes to go. I feel that I finally have some order back to my life and am glad that my other forms of art and interests have their own space to grow in.

Onward to the bulldog... As you can see, he has been transferred on a light box to Bristol board and taped off on the edges. I have mapped the major markers of his fur on the parts of his body that will be semi out of focus. These markers play an important part of recognizing the animal. I did not shade in the dark areas of the body just the cast shadows. The blending process will do a lot of the body shading for me. If I shade in this step, I run the risk of muddying my marks and would have to map them out all over again. (I do hate rework!) ;0)

I will finish up the body before doing the face. There are not many clear details in this vintage photo, but I think that some can be pulled out of the facial features. I am leaving the face until after the body so that smearing will be at a minimum. Since things have settled down around here to a normal pace, I hope to make some solid progress in the next couple of days. :0)
Posted by Brenda at 7:43 PM No comments:

It is time for a new beginning! This is the photo that has sat patiently by my drawing board's side for a chance to be put into graphite. It is a commission for a pet bulldog. The picture is in black and white. (Yes, I prefer color, but this will be an interesting change of pace.) The dog is a beloved pet that has been deceased for quite some time, so this will be the reference that I'll have to work from. There is not a lot of fine detail, but I am hoping that will not take away too much from the finished product. The talk was originally about taking the markings and putting it on another bulldog. It may sound crazy, but I would like to try this way of drawing him first, because this pose/composition is really him. Maybe it is the nit picky photo realist in me (more likely the devoted pet owner in me), but I want to see their honest to goodness pet in my finished work-- not a body double. This drawing will be my tribute to a family pet. I feel up for the challenge and hope to do this sweetheart the justice he deserves.

The original photograph is 4 1/2 x 3 1/2". The finished product will be 9 x 7". As you can see, my graph for the photograph is in 1/2 inch squares, and my sketch is graphed in 1 inch squares. I find it easier, oddly enough, to make the line drawings of the squares match, when I am enlarging the original subject (more room to work I guess!). The original photo does not have a lot going on object wise, so I did not take the time to blow up the photo for the initial sketch. The composition should remain the same as the original photograph, but I was given a close up of the face from another pose (that photograph is in small format, also). I was toying around with the idea of a mixed composition but haven't fallen in love with it, yet. I'll leave that idea floating around in my head for another day and make my decision.
Posted by Brenda at 6:23 PM No comments: 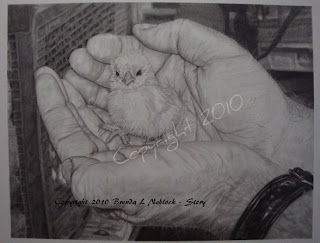 Happiness is calling a long work in progress finished! This artist will be smiling when I hit the 'publish post' button. I will then be able to enter the blissful state of a clear mind and new ideas...

Well, the background is complete. I honestly thought my last background on the 'Chick in Hand' was busy, but that was nothing compared to this one. It took me way more time than I had bargained for. I made myself walk away from it a few times, because it felt like the process was becoming a chore instead of a joy. The logical solution would be to do the background first in my drawings, but I can honestly say that idea does not set well with me. It is just a stumbling block to think that I have to do my main objects while being careful of graphite on the outskirts. (My preference is the most precise areas first with no distractions.) Another solution would be to go from left to right, but that scenario (in my opinion) only works in certain less busier compositions. The final and best solution is to work on my background in more sessions with less time spent. (I'll make a note of that!)

Where was I going with this?? Just rambling on a tangent... Okay, what did I do to finish up this drawing. Well for starters, I darkened up some of the folds and lines on the hands after the chick was rendered. The majority of this was needed due to some smearing that took away the deep values. Then onward to the background, its values were darker than the hands which made the very edges (of the hands) look light. So, out came the blending stump, and I made a smoother transition between the two. After that, it was simply a matter of being happy with the values of the background after the details had been put in. ( I use an eraser for most of my detail work, so I am constantly going back to darken.) Oh and almost forgot to mention, you'll notice that I did shave about a half inch from the left side of the composition. It was going to be a distraction and would add nothing to the finished work.

I hope this is all making sense. It is always hard to write a post on a day that I finish a drawing. I guess, my brain is still a jumbled mess. It was just important to me to get this one up right away and call it done!

What is next on the drawing board? Well, I have some really nice people waiting for their bulldog to be put into graphite. I have some reference pics that are very small. My cannon will get a run for its money while trying to enlarge and keep the details intact... might just have to call on a few friends for some photo favors on this one! I felt terrible not starting into this commission right away, but my mind was so deep into this project that I didn't dare start another one simultaneously.
Posted by Brenda at 7:20 AM No comments: